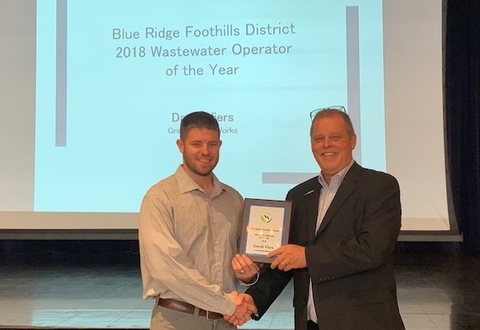 Greer Commission of Public Works (CPW) employee David Viers was recently named the “Wastewater Operator of the Year” by the Water Environment Association of South Carolina Blue Ridge Foothills District. David has been with CPW since February 2016 and currently serves as the wastewater treatment plant lead operator.

David was nominated and selected Tuesday January 15th at the Blue Ridge Foothills District annual awards banquet in Lyman. Nominated by his peers and coworker Daniel Fahr, he spoke highly of David’s strong work ethic in just a short amount of time at CPW.

“David continually strives to improve himself. He spends extra hours at the plant studying biological wastewater topics… is a natural leader and has used this ability to gain the trust and respect of fellow operators,” said Fahr.

David currently serves with the South Carolina Air National Guard as an aircraft mechanic, is a husband, father of two and recently was accepted into Charleston Southern University.