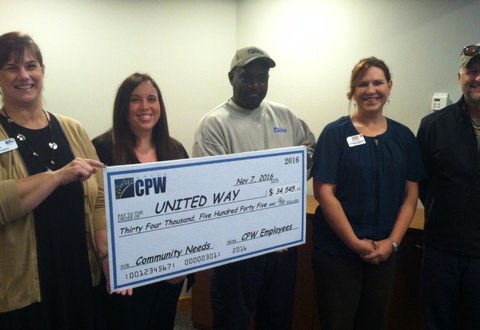 GREER (November 7, 2016) – Hot dog fundraisers, golf tournaments and ice bucket challenges- just a few ways Greer Commission of Public Works (CPW) employees surpassed its goal of $30,000 for the United Way of Greenville County. This year, CPW employees reached a record monetary commitment, raising $34,545 and counting for United Way of Greenville County – a non-profit who brings people and resources together for a brighter future.

“I am always impressed by the kindness and generosity of our employees, daily in their interaction with the residents of the community and as well in this philanthropic endeavor,” said Perry Williams, Commission Chairman.

This year’s campaign was led by tri-chairs Keith Almond, Dayna Phillips and Gene Rhome. Employees participated in best- of BBQ’s, Fantasy football leagues and bake offs. All total employees committed to the campaign by pledging more than $28,000 from their own pay.

“It makes me feel good to partner with and help support an organization like United Way. I think that future committees will be able to build on these fundraisers and continue making a difference,” said Keith Almond, Greer CPW.

CPW employees have participated in United Way campaigns for more than a decade but each year the dollar amount raised continues to increase. During this campaign, employees also participated in the United Way School Tools helping more than 3,000 students in need. “The thing that surprised me was how giving and thoughtful Greer CPW employees were. You always want to see the best in the people you surround yourself with, but the fundraising really shows how much they all care,” said Dayna Phillips, Greer CPW.