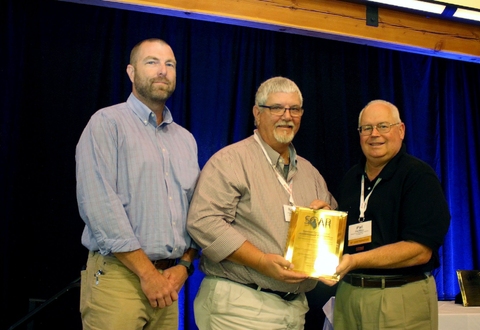 CPW Gas Department Excels; One of Six Companies in US to Win Gold Level Award

“Our staff has worked diligently the past four years to improve skills, promote safety in the workplace and use technology to be more efficient with our work. This achievement is something all gas utilities strive for and we’re honored to receive it,” said Rob Rhodes, Gas Department Manager.

Greer CPW is one of six companies in the United States to receive the award this year and out of 202 possible points, Greer CPW received 197 from the APGA Operations and Safety Committee. Gas Department Manager Rob Rhodes and Regulatory Compliance Supervisor Jonny Corley accepted the award earlier this week at the 2019 annual conference in Stowe, Vermont. The recognition will run from 2019 – 2021.

Greer CPW previously received the bronze level in 2015 and silver level in 2016. This is the first gold level award for the company and is based upon system integrity, system improvement, workforce development and employee safety. “This is a salute to the employees that maintain high standards in their work each day. I’m honored to lead such a dedicated group of employees,” said Rhodes.

– Greer CPW’s gas territory is the largest of all utilities and spans from Southern Spartanburg County to Landrum and Wellford to Taylors.

– Natural gas is the earth’s cleanest fossil fuel and is composed of four hydrogen atoms and one carbon atom.

– Greer CPW owns and operates a compressed natural gas filling station for cars, larger fleet and is open to the public.