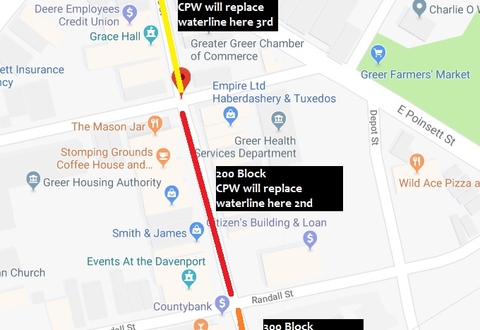 2019 will bring a new look to downtown Greer above and below ground. Starting January 7th, Greer Commission of Public Works (CPW) will continue its work to replace the existing waterlines along Trade Street between the 100 through 300 blocks. This work is a part of the upcoming City of Greer’s streetscape project that will create a shared street concept for downtown Greer.

Starting as early as January 7th, you can expect to see CPW crews along with a CPW contractor, Howard Construction, performing preliminary work related to the upcoming waterline work. Additionally, uniformed CPW employees will be contacting business owners to access the buildings basements for future water line work.

Because of the work, portions of Trade Street impacted by the construction activity will be closed to vehicle traffic during work hours (8:00 am to 5:00 pm). Pedestrian traffic will remain open however four parking spaces, that will move with the work, will be used for construction vehicles during the duration of the work. The trenched areas worked for any given day will be backfilled/compacted with crusher run gravel and/or covered by steel plate so that vehicles may freely use the road during non-construction hours.

No boil water advisories or water pressure issues are expected for businesses or residents due to the construction. CPW crews may be in the area for the next 6 weeks.